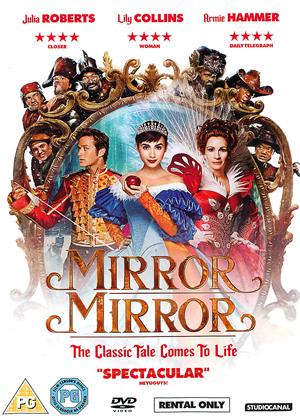 I didn't realise quite how much this film is aimed at children. For those over 14 there is not much to be gained by this simple: goodie prince, goodie princess, baddie queen, film. Guess what happens in the end. You're right.

Lily Collins and her eyebrows star as the beauty in one of the two blockbuster recreations of the classic fairytale of Snow White, Mirror Mirror. Starring alongside Collins are the huge talents of Julia Roberts as the Evil Queen and Sean Bean and Collin’s daddy, the King.

Yet Mirror Mirror is not the traditional fairy tale story of Snow White and her seven little friends; a group of bandits and a love potion that turns Prince Charming into a lovesick puppy (in every sense of the phrase) are just a few examples of the changes that have been made to try and update this age old fairy tale.

These elements, all of which reek of an attempt by the writers to pull in the young and cynical audience, fit as well as Collin’s bikini on Shrek; all that jiggling and clunking around create quite a distraction in the narrative and rather than providing you with some laughs instead leave you wishing you could have a bite of Snow’s traditional apple.

The acting is adequate, the least one can expect from such Hollywood big wigs as Bean and Roberts, and the visuals, particularly the costuming and set design, is certainly lurid and fun, but nothing about this movie is interesting enough to compensate for the poor writing.

Though there are a few funny moments, by and large Mirror Mirror was a disappointment; the jokes are crude and unimaginative, the twisted narrative unimpressive and the eventual outcome less of an A-List blockbuster and more of like a made-for-TV tragedy.