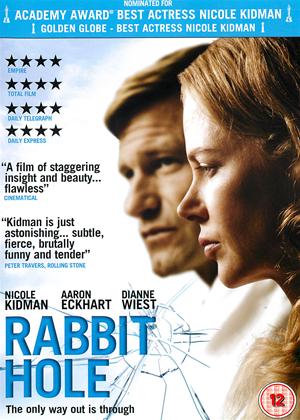 Based on the award winning play by David Lindsay-Abiare, Rabbit Hole tells the story of a once happily married couple’s decline as they grieve for the four year old son, Danny, who was killed in an accident eight months earlier. The couple, Becca (Nicole Kidman) and Howie (Aaron Eckhart) take quite different approaches to their grief; Becca distancing herself from others and trying to remove herself from anything that reminds her of her son, whilst Howie finds some solace in a support group and a particular female member of that group. As the film progresses the couples’ relationship begins to deteriorate, Becca being determined they move from the house they lived in with their son, driving Howie away into a questionable relationship with female group member, Gabby (Sandra Oh).

Premiered at the Toronto Film Festival 2010 the film is not easy to watch, the subject matter is enough to make many people uncomfortable, but the film’s dealing with the content has a simple and honest feel to it. It plays the couple quite even handily, suggesting that neither characters particular way of grieving is or isn’t appropriate – although Eckhart’s role is considerably smaller than Kidman’s’.

The film also explores the strain such tragedy can place on relationships outside marriage, including friendship and sibling closeness. Kidman, whose performance was critically acclaimed, completely steals this film however. She seems to play the film with two faces: the everyday Becca who must keep doing all the things a housewife is expected to do whilst constantly struggling with the undercurrent of her pain. For example she begins meeting in secret with the teenage boy who caused her son’s accident, bonding with him in an almost maternal fashion; taking a genuine interest in his life, his likes, his hopes and dreams. Whilst her husband is completely unaware of this new vein of comfort she has found.

The portrayal of this painful subject matter is delicate and deals with some of the deepest aspects of human nature. It is understandable why the film received a standing ovation at its premiere last year.