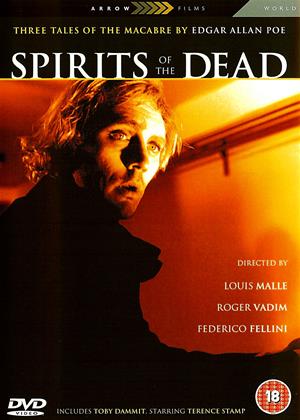 Reviews (2) of Spirits of the Dead

Saved by Fellini? - Spirits of the Dead review by CP Customer

Each part of this 1968 film (based on three of Poe's short stories) was directed by a different director (Roger Vadim, Louis Malle and Federico Fellini). It has a cast of big names (Jane Fonda, Alain Delon, Peter Fonda, Brigitte Bardot, and Terence Stamp) and a narration by Vincent Price. None of this quite saves it from being dreadful. The best of the three is the Fellini segment (almost as good as Juliet of the Spirits).

Come back Roger Corman, all is forgiven! - Spirits of the Dead review by Count Otto Black

Yes, it's that rarest of beasts, a sixties Edgar Allen Poe film Roger Corman had absolutely nothing to do with. Vincent Price does provide narration (in French), but he sounds so disinterested, if not downright bored, that I didn't recognize his usually unmistakable voice, and, presumably at his own request, his name isn't in the credits.

Instead of Corman, we've got a trio of European arthouse directors doing a third of the film each. Roger Vadim goes first, with a tale bearing no relation to Poe other than borrowing the title of an unfilmable short story in which nothing happens. Mainly it's an excuse for him to show off his trophy wife Jane Fonda looking cute in various leftover Barbarella outfits. She also holds some of the tamest orgies you'll ever see on screen, and falls in love with a horse. Which sounds as though it ought to be a lot of fun on several levels, but it's just pretentious and painfully dull.

Louis Malle's "William Wilson" is a straightforward Poe adaptation, about an evil man whose conscience inexplicably comes to life as his good twin and keeps ruining his fun. That's it. Oh, and Brigitte Bardot gets whipped. It does at least try to be a horror movie in the Corman style, but it fails miserably, plodding along so lifelessly that its 40 minutes feel more like 80.

And then we come to the Frederico Fellini segment, in which a magnificently dissipated Terence Stamp, looking very punk rock indeed eight years before it was invented, plays a bad-boy Hollywood actor undergoing his own personal "Fear and Loathing in Rome", which may or not be semi-hallucinatory and/or a literal descent into Hell, and reminded me a lot of "Jacob's Ladder". Needless to say, this is far and away the best part of the movie. It even has the wit to savagely mock pretentious arthouse films while deliberately being one of those turned up to 11. I just wish we'd gotten to see a bit of the movie our hero is in Italy to make: the life of Jesus Christ reimagined as a spaghetti western.

If Fellini, or indeed anybody, had directed the other two segments with the same level of style, humor, and sheer bizarreness that he brings to the last part, this movie would have been an oddball Surrealist classic. But what we get is a tedious waste of time which at 80 minutes is long enough to be an entire film, with one-third of something worth watching stuck on at the end, almost like a prize for getting that far. And movies are supposed to be entertainment, not an endurance test.