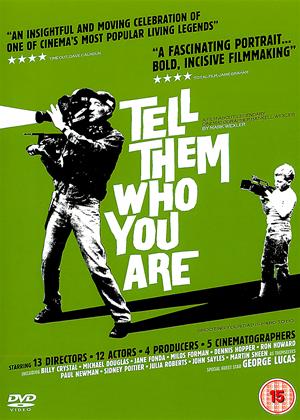 Synopsis:
Mark Wexler's cinematic blend of biography and autobiography centers on his relationship with his father, legendary cinematographer and filmmaker Haskell Wexler, whose long and illustrious career is a virtual catalogue of 20th century classics. Haskell's collaborations with such world-class filmmakers as Elia Kazan, Milos Forman, George Lucas, Francis Ford Coppola, and Mike Nichols include such works as Who's Afraid Of Virginia Woolf?, American Graffiti, Coming Home, Bound For Glory and One Flew Over The Cuckoo's Nest. The film features interviews with these artists, along with such luminaries as Jane Fonda, Michael Douglas, Ron Howard and Julia Roberts.
But the true "star" of Tell Them Who You Are is Haskell himself, a larger-than-life character who challenges his son's choices about camera placement, lighting and storytelling while announcing with complete conviction that he could have done a better job directing most of the films he's shot. As these two men swap positions on camera and behind it - sometimes shooting one another simultaneously - the film looks with honesty and compassion at their attempts to reconcile before it's too late.
Actors:
Haskell Wexler, Mark Wexler, Billy Crystal, Peter Bart, Verna Bloom, Michael Douglas, Jane Fonda, Milos Forman, Troy Garity, Ronnie Gilbert, Conrad L. Hall, Conrad W. Hall, Tom Hayden, Dennis Hopper, Ron Howard, Norman Jewison, Elia Kazan, Irvin Kershner, George Lucas, Albert Maysles
Directors:
Mark Wexler
Writers:
Robert DeMaio, Mark Wexler
Studio:
Metrodome
Genres:
Documentary

Rent other films like Tell Them Who You Are

Reviews (1) of Tell Them Who You Are

Killing Dad - Tell Them Who You Are review by CP Customer

The biography of a great cinematographer, you would assume, is not the appropriate place for parricidal impulses, however justified by an absent, neglecting or rejecting parent. Mark Hexler’s documentary about his father, Haskell, exposes his desperate need for revenge against his more famous, more politically radical and obviously far more talented Dad.

No one could claim that Hexler senior is a dear old sweetie; he’s a difficult, demanding and probably infuriatingly egotistical person, but great artists frequently are. Which is where I came in; if you want to get down to brass tacks with your parents, the parental home, the first novel or fiction film, or the psychiatrist’s couch is the proper place to do it, not a documentary.

I have checked on IMDB and whilst the list of films shot by Haskell is long, and wonderful, all I can find for Mark, apart from this documentary and a film about a matchmaker is a documentary about Air Force One. This is clearly something of which Mark is very proud, as he gives a picture of himself with George Dubya, to his still Radical Dad, and there are plenty of other shots of Mark with the American Great and the Good.

The bitchiness of his taking the trouble to point out his Pa’s failures, (Blaze) as well as his shortcomings becomes really unpleasant when he rows in his Alzheimer’s affected Mother, to be wept over by Wexler Senior. I feel the old gentleman was ill advised to sign the release form at the close of the film, or to have anything to do with it at all.