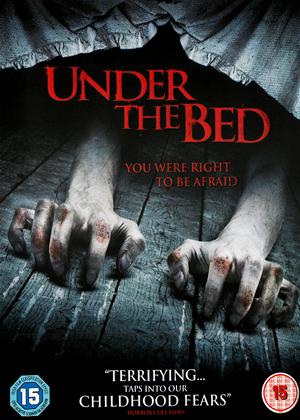 Reviews of Under the Bed

Under the Bed review by Alyse Garner - Cinema Paradiso

In my opinion there are two kinds of good horror film, the ones that strive only for scares, to make the audience jump, scream, squirm or gag, these are, by and large, the more financially successful, involve big stars and often include a scene in which a busty young woman is murdered in her underwear. The second kind of film tend usually to run on a far tighter budget, the include unknown actors, or those smart Hollywood actors who like to branch out to something a bit unusual every now and then, their narratives are anchored in back-story and history and their monsters are often metaphors for something far more real.

Under the Bed attempts to be the later but, because of the failures one normally quotes when discussing the former, winds up just being disappointing.

Like most children. Neal (Jonny Weston) spent his childhood terrified that there was a monster under his bed, unlike most children however Neal seems to have some kind of mental breakdown and starts a fire that subsequently kills his mother. After spending several years in an institution Neal returns home to find his father remarried and his younger brother Paulie (Gattlin Griffith) seeing the same monster that drove him crazy two years earlier. With an excellent foundation upon which to create a film that explores the family dynamic, brotherly love, support, fear I have to say I was quite disappointed when the monster starts jumping out from behind furniture and killing visitors.

I suspected that the film makers had basically decided to discard all attempts at a story from this point and I settled in for a thrills and chills creature feature. However by attempting to hold a foot in each camp, maintaining a story that, despite a strong skeleton remains poorly fleshed out, and including obvious and clichéd horror scenes Under the Bed ends up lacking both soul and suspense.

I’m not entirely sure what director Steven C. Miller, a well established horror director whose talents had, so it seems, been steadily improving with each production, was hoping to achieve with Under the Bed, but whatever it was, he was unsuccessful.