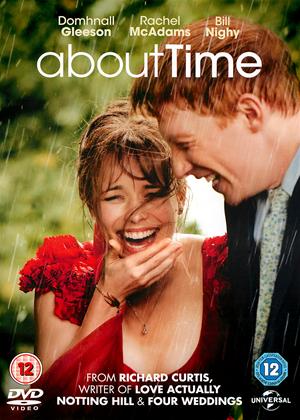 Synopsis:
At the age of 21, Tim is told an incredible family secret by his father: all the men in his family have the ability to relive their past. He can revisit any moment in his life to try things differently until he gets them perfectly right. He decides to use his special new gift to win the heart of the beautiful Mary, but finds that the course of true love can be hilariously difficult - even with the ability to try, try and try again.
Actors:
Domhnall Gleeson, Rachel McAdams, Bill Nighy, Lydia Wilson, Lindsay Duncan, Richard Cordery, Joshua McGuire, Tom Hollander, Margot Robbie, Will Merrick, Vanessa Kirby, Tom Hughes, Clemmie Dugdale, Harry Hadden-Paton, Mitchell Mullen, Lisa Eichhorn, Jenny Rainsford, Natasha Powell, Mark Healy, Ben Benson
Directors:
Richard Curtis
Producers:
Tim Bevan, Eric Fellner, Nicky Kentish Barnes
Writers:
Richard Curtis
Studio:
Universal Pictures
Genres:
British Films, Comedy, Romance
Countries:
UK

Reviews (6) of About Time

Every day, we all make potentially life changing decisions, whether these are big decisions, or small, they can change the course of your life.

But being given the knowledge you can try a decision, and if it doesn't work out, just rewind back to the point you made it, and then go in a different direction, would be fairly mind blowing.

The journey of discovery of how to use these powers is fun, Tim 'rewinds' time throughout the film in order to improve on the last iteration of reality.

A touching, emotional trip through a fictional reality that we would all probably like a go at.

I hated this film. So much so that I left just after half way through and returned just to see the ending - which, as per usual with Richard Curtis films, is wincingly sentimental and milks emotions for all they're worth. If you like that sort of thing, then fine, Me, I hated it. Maybe it's more a women's film?

So, typical Richard Curtis film: we have a main character who even LOOKS like Richard Curtis, an upper-middle-class Englishman who grew up in a house that has to be worth 2 or 3 million in a family that claims, as all Curtis characters, that they are not rich.

There are weddings, funerals, loads of bumbling upper-middle-class rich Englishmen and, of course, the obligatory American characters - always an American female love interest in Curtis films too.

The idea for this is an old time travel one, lifted quite shamelessly from many a science fiction film or book or play or whatever. Nothing whatsoever original about this film and I did not laugh or smile once - I winced a great deal though.

For me this is a one star mess of a movie; those who like treacly saccharine sentimental lovey-dovey stories - like Mills and Boon for those who own 5 million pound houses in Notting Hill then claim they're just ordinary and not rich at all - may enjoy it. You pays yer money. Me, I shall never be watching a Richard Curtis film again - the man is a menace with a constant drip drip drip of the same old sentimentalist love stories featuring Americans and bumbling Englishmen and very VERY few black people indeed (the London of Richard Curtis is not like the 40% ethnic city I cannot afford to live in any more!)

The best 12 rated film ever - About Time review by JD

Domhnall Gleeson has a glittering career ahead of him. I have only previously seen him in Frank. Both are very powerful and moving films. He gets into your soul. I was attracted to the film because of Bill Nighy who has a glittering career behind him and his performance was brilliant. The plot is original, involving time travel, and for such a thought provoking one has only a few holes in it. I won't spoil it by pointing out the ones I spotted because it doesn't matter at the time. There is enough sadness for the romantically inclined but also enough plot for the more analytic andtons of comedy for simple pleasure.

Old Richard Curtis jokes and themes regurgitated yet again. Desperate attempt to recapture the zip of 'Four Wedding' but falls short by a mile with a lacklustre script and nondescript cast. And, of course, Bill Nighy doing his usual stick insect routine.

Good relaxing film for a Sunday evning in front of the fire. - About Time review by MH

Not a work of great cinema importance or one of the 'greats' , but a thoroughly enjoyable rom/com for those of us who just like to relax and enjoy a bit of escapism - without waxing too intellectual over the experience.

Groundhog gets money. - About Time review by NC

Once again we have the idle rich wandering about. Opposite backdrop to Run Fat Boy Run. Not being a communista, but lack of reality is almost as far fetched as the theory of Narnia/cupboards.

That said, the acting is pretty good, and the execution saves the film from being total waste of electricity. Bill is Bill, as usual. His way of moving and talking almost precludes him from doing any other type of film, although he could easily go for spooky serial killer like the much missed Robin Williams in One Hour Photo. Billy Connolly could be very nasty guy when wanted to be, and he is supposed to be a part time actor. Come on Bill, get a meaty part and break the mould.

- Richard Curtis has always been one who appreciates the human spirit and all his films play to the good in people, even if the films may contain some horrible people. About Time is just like Curtis’ usual fare except for the fact that the real story isn’t the love story we were promised by the trailers but a much more personal and important one.

About Time follows Tim (Domhnall Gleeson), an introverted young man who is told he can travel through time by his father (Bill Nighy). With this discovery Tim sets out to accomplish the one thing he has always wanted to do, get a girlfriend. When he meets Mary (Rachel McAdams) he does just that but the question is, will his powers ruin what he has tried so hard to get.

While most of the film is consumed with Tim’s idea of the perfect life and how he can achieve it, the films core story revolves around his relationship with his father, the man who has guided him not only through his childhood but his less than conventional young adult life. Gleeson and Nighy are excellent and share some impressive chemistry. Although the film strives to make Mary important, she plays second fiddle to Nighy and the films father son relationship.

Gleeson, although an unusual choice for a mainstream picture, makes Tim both extremely likable and unbelievably unfortunate. Curtis, a master of cringe humour and uncomfortable situations, is a perfect match for Gleeson who clearly understands the theatrics that Curtis comes to expect from his performers.

While the film lacks a conventional story it makes up for it by displaying a life well led. The film follows Tim through his triumphs and pitfalls in a natural way while only subtly changing the character. In fact for a time travel film, everything feels natural and realistic.

While not Curtis’ best feature, that honour goes to Love Actually, About Time is definitely his most grown up and for that reason it’s a pleasant and heartfelt watch.