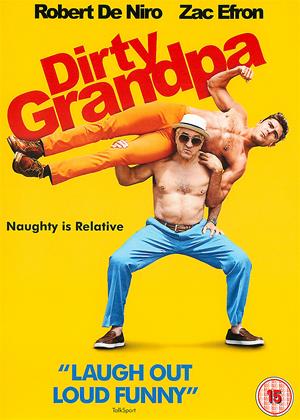 Perhaps this is American Humour but I can't understand it. Very schoolboyish. Using filthy language isnt that pretty and trying to get laughs that way is not funny to me. I'm really surprised Robert de Niro lent himself to this character. Very childish and basic and a pretty ridiculous plot

Like swimming in a sewer... - Dirty Grandpa review by TB

The worst comedy show I have been to was a Frankie Boyle gig. This was after he had left Mock the Week (no, he wasn’t fired as was inaccurately reported) and had also just won a libel case after being accused of being racist (the newspaper took the joke out of context and Boyle is not racist.) With this legal victory and clearing of his name, Boyle came out on stage and seemed to have written this show to be as revolting and disgusting as possible, as if to really hammer home how rancid his comedy can be. The reason it was the worst comedy show I’ve seen is that none of it was in any way funny...

This is a film where Zac Efron walks in on De Niro’s character Dick (you see what they did there?!?) pleasuring himself and this isn’t just a quick fleeting moment, but a long drawn out scene. And this kind of toilet humour is just repeatedly endlessly, in different contrived set ups for the whole film.

I don’t want to list too much more of the film’s content, as the official Cinema Paradiso review is absolutely brilliant in conveying how not just revolting but also unfunny this film is. The only thing I want to add is that I am a big fan of edgy, dark and what some people call controversial humour and jokes. I believe that when you have something/a subject which difficult or upsetting for any number of reasons (such as sexual abuse,) one way to remove the power and horror of this is to find ways to ridicule and undermine it. Whether it’s edgy comedians like Jim Jefferies or even black comedies like Elle or American Psycho, there is amongst the horribleness real, funny, biting humour.

But watching Dirty Grandpa, you don’t laugh or find anything in it funny, you just feel disgusted for having been a witness to it.  You get to the stage where you think, how many different ways are there left to talk about sex and genitals in the worst and most disgusting ways? The best metaphor I can use to describe this film is the dirty old man everyone will have seen at some stage in their lives when out and about, and turning and walking in the other direction so you don’t have to hear or see what he is doing.

This film is disgusting. For some people, that is reason enough to see it. But save yourself the time and know your life is better having not watched it.

Dirty Grandpa is a nightmare of a picture. It’s a concept that’s unbearably unbelievable and even more so when viewing the final product. I have never felt a more fervent desire for the grand finale of a terrible movie to involve myself awaking from a bad dream. But, no, Dirty Grandpa does exist and its grand finale involves Robert De Niro having sex with a younger lady begging him to dirty talk in old people babble.

The role of Dick is the absolute lowest of De Niro’s career and that’s saying something for a man that stuck around for Meet the Fockers and Little Fockers. Here is a man that was once an A-grade actor reduced to a script where he’s propped up to spout dialogue about penises and vaginas. His jokes are entirely centered around the use of these words, constantly calling his son Jason (Zac Efron) a penis-related name and referring to anything with a tight space as a vagina (“You dropped your phone in the car’s vagina”). When he’s not attempting to sling the most childishly low-brow of jokes, he’s poking Jason in the butt or getting naked in front of him. You may think his vulgar actions have an arc to his character. They don’t. You may think he has some lesson to learn. He doesn’t. This character’s entire existence is to be the old, gross and juvenile elder - nothing more and nothing less.

The plot is typical road trip tripe. After Dick’s wife passes, he chooses Jason as his driver to transport him from Georgia to Florida. Why the need to go to Florida? Dick apparently has a raging sex drive and needs to have sex with lots of women. He wants to drink, he wants to do drugs and he wants to party with legions of frat boys and young ladies. Jason wants none of this as he has to get home to his own wedding. A Jewish wedding, in fact, which leads to the eventual presence of an embarrassing swastika. Surprisingly, this particular gag, even with the addition of the swastika being drawn in the form of penises, never generates a reaction. Not from the family and not from the rabbi. It did generate a depressed sigh out of myself.

The obligatory road trip moments apply. Jason accidentally takes drugs at a party and likes it. Jason wakes up naked the next morning. Jason is arrested and thrown in jail by nasty cops. Jason falls for another woman on the journey to his wedding. Where is Dick in all this? Either masturbating, wrestling frat boys or laughing at Jason from the background. The only time that Dick and Jason seem to connect is during some sort of crowd stunt content. I couldn’t follow it very well with all the beer and cheering, but it apparently involves being shirtless and acting like a fool. Oh, and there’s a fart joke.

I can’t remember the last time I felt so detached from a movie trying so hard to offend. There is no story developed well enough to be invested in. There is no human that isn’t presented as a cartoon character. There is no joke that surprises nor a gag that is clever. There is nothing but colors and potty talk smeared on the screen. The easiest way to describe its script would be a cobbling of late-night comedic jabs among drunken college frat boys. They’re funny when you’re drunk, but sadly vapid when sober.

There is no doubt in my mind that Dirty Grandpa will be the absolute worst movie of 2016. I know it is early and that these releases from January tend to bring such easy criticism, but the awful meter has been set very high for 2016 with this whopper of a travesty. The only thing that could top such a lazy and gross motion picture would be a road trip movie starring Eddie Redmayne and Michael Keaton where they must be covered in donkey feces and only speak in puns. That’s the only thing I could imagine being worse than watching Zac Efron having his taint groped by Robert De Niro.