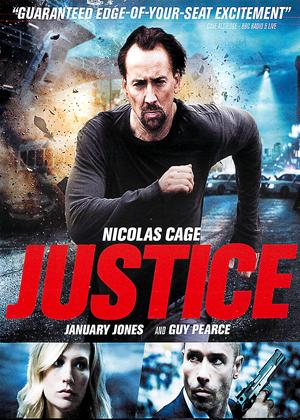 Nick Gerard (Nicolas Cage) and his wife (January Jones) are celebrating their four-year wedding anniversary. They live in post-Katrina New Orleans where not only is the location decaying because of the flooding disaster, but also the morality of its citizens. What was supposed to be a happy occasion turns tragic when Nick’s wife gets raped, and as he mourns the loss of their sense of security and the violence done on his loved one, a shady man arrives in the form of actor Guy Pearce.

He offers Nick a way to avenge the rape of his wife but on one condition: that Nick does him favors right after in return. Nick agrees to this proposition and the deed is done, and yet, Nick is not entirely off the hook and trusting the vigilantes could have been the biggest mistake he has ever done in his life. This is ‘Justice’ directed by Roger Donaldson and it’s another Nicholas Cage movie that is all that you expected and more. (Yes, it’s not that good.)

As far as revenge movies go, ‘Justice’ doesn’t have the credentials to be part of the genre. The silly dialogue, the sloppy directing, the movie star Nicolas Cage – all elements that could make it more of a B-movie than anything. Cage, an Academy Award winning actor, can do great work but lately, he has been drawn to campy fare that he probably knows how to do even with his eyes closed.

Whether Cage has gone lazy or he wants to get paid – badly – it’s okay if this were the career trajectory he wanted, but at least, choose wisely. You can be camp and be good, but ‘Justice’ doesn’t even pretend to be anything more than mediocre. What a waste, when you have Guy Pearce as the main villain, caricaturized for this one: shallow and mundane. The action sequences are trite and boring, the conspiracies easy to figure out, and the actors just passing through, blank and unemotional.

‘Justice’ has the potential to be okay if it tried. But then, it stars Nicolas Cage.