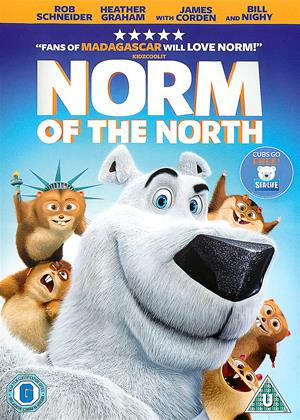 Reviews of Norm of the North

Norm of the North review by Mark McPherson - Cinema Paradiso

Norm of the North is not just another animated farce to keep the kids calm for a few minutes. It is the type of watered-down movie trash you throw on when you are so neglectful of your children you don’t care what they watch. This is the bottom of the barrel with its blandest of the bland script and animation that thinks so low of its audience. This was a movie built by numbers and research as opposed to writers and artistry. It sells no product and it harbors no message. As far as animated movies about talking animals go, this one is pure nihilism.

The titular polar bear Norm (Rob Schneider) is established as a creature that would rather sing and dance than hunt and eat meat. He’s clearly better suited at dancing than he is at catching his lunch. Any polar bear that cannot hunt is a dead polar bear. What does he eat? Apparently his grooving feet are enough to keep him warm and full. The movie spends no time establishing how Norm survives the winters, but does explain how he has inherited an ability to understand and speak with humans, a trait that is apparently passed down in his family and skips a generation.

A threat occurs in the arctic when humans have begun to setup this tundra to be the next tourist hotspot. As ludicrous as this sounds, I must admit that I wanted to take an extended vacation to Antarctica after viewing its majesty and quiet in the documentary Antarctica: A Year On Ice. Though I probably wouldn’t enjoy it as much if it was populated by a mass of hotels and eateries. It’s up to Norm to stop these land-hungry humans from treating his snowy home as the next vacation destination. How can a polar bear save his home? Through dance, of course. Yeah, that’s the ticket. How else was the movie suppose to tie-in its plot of Norm’s desire to be a dancer? I’d like to point out it took three writers to conceive this script.

Up and down, across the board, Norm of the North is cheap. From the ill-thought story to the blocky animation quality to the C level cast, nothing here screams of effort. It should have been relegated to home video as it already has two cheaper direct-to-video sequels in development. On a budget of $18 million, it really shows in comparison to the competition of Kung Fu Panda 3 or The Secret Life of Pets, a movie which was on the low end costing $75 million. And for as much as I thought those movies were repeating themselves from a lacking script, they still had an artistic edge and some creative visuals. Norm of the North is what happens when you let that aspect slide as well on a miniscule amount of a production budget.

Any hope of finding something in Norm to latch onto, positive or negative, is missing. One would think that the whole save Antarctica plot would have something to say about global warming or environmentalism? Nope, not a shred of stance, so you right-wing parents can rest easy. Perhaps the evil tycoon that wants to build on the land holds some commentary on technological progress interfering with human nature and desire? Not a chance - merely an excuse for hip jokes. Could the dancing polar bear at least have some smooth moves based on actual dancing? Please - it’s twerking all the way for this bear!

In trying to determine just who to recommend this movie towards, I briefly thought of parents that just want something new to watch with their kids, but kids deserve far better than this. Parents, I implore you - from one parent to another - do not let your kids watch this. It won’t send them the wrong message or sell them on some expensive new toy, but it will rot their brain with simplistic dancing, a tired story and characters that have no personality. And something that vapid and devoid of thought could be far worse for their developing minds.