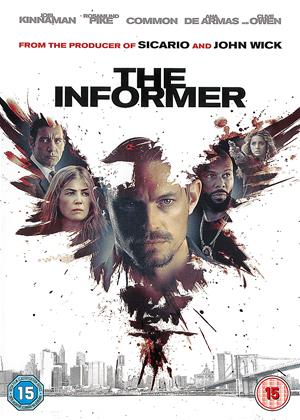 Reviews (3) of The Informer

This is a taut, propulsive thriller about an FBI informer who has infiltrated a Polish mafia gang in New York. He is forced to go back to prison to carry out orders of the mafia boss. What follows is the informer, played very well by Joel Kinnaman, desperately trying to stay alive. There is strong violence and betrayal. Rosamund Pike plays a conflicted FBI agent. It is all done extremely well. Recommended.

Joel Kinnamon is a decent actor and fits the mould of action hero star. However this film is a very standard thriller. Nothing really stands out with serviceable script and acting. The twists you can see coming a mile off. It's not exactly bad but you wont feel like you have missed out on anything if you didnt see this film.

Good but not Great. - The Informer review by IG

Well made film with decent actors that moves along and entertains, downside is a rather predictable storyline similar in many ways to a host of other films of this genre, a good but not great film.

Kudos Joel Kinnaman for trying to keep reaching for that action star after the misfire of 2014’s Robocop remake and the sloppy Suicide Squad that did him no favors. He’s trying his best to fit that action movie guy bit in a sea of head-shaved, bearded, vanilla white guys where the likes of Sam Worthington have drowned into obscurity. Informer showcases Kinnamon at perhaps his better levels of mindless grit but it’s unfortunately in service of a by-the-numbers action-thriller with its only notable aspects being a cast that includes Rosamund Pike, Common, and Ana de Armas.

Kinnaman plays Pete Koslow, ex-criminal and ex-special forces. Since those occupations became far too stock for such a simplistically gruff character, he now works for the FBI as an infiltrator of the mafia. Of course, he takes part in this only from a crooked angle that’ll satisfy that throbbing machismo egotism. None of that truth and justice malarky for the killing Koslow. After all, he’s only doing this for his freedom, of course.

But now the mission has become all the more complicated. Pete must now make a return to prison, a place he had hoped to leave behind. And his troubles are for more than just nostalgia. A drug deal goes bad and with his identity threatened to be revealed, the clock is ticking in terms of how long the mission can succeed and how long Pete has to survive being locked in his cage. And it only gets messier. Pete also has a family that could be in danger with all this. Only with the help of the NYPD’s Gren (Common) can Pete hope to survive the violent betrayal of handler Montgomery (Clive Owen).

The whole sting operation can work well with so many moving parts but less so when they run so clinically you can hear the rusty gears turning away. The events proceed with a lot of tiresome procedural direction where characters speak in stone-faced cliches. The action feels sparse, which could’ve been a great surprise from the tedium of the text, but all of unfortunately lands with a dud. Even when Pete has an emotional attachment of a family to work harder as an undercover agent, this feels about as tacked on as everything else in the picture, more concerned with keeping strict continuity of mafia to law connections than anything meaningful either thematically or character-wise.

It makes a bit of sense that this is an Americanized version of Roslund/Hellström’s Swedish novel Three Seconds. It takes an intricate story and dunks it in a big batch of emotion-free malarky that rarely resonates. Even if trying to appreciate the picture on its mere assembly, it still feels as though there are a few gaps here and there that prevent this story from fully entertaining on its premise alone. Maybe with more time there could’ve been a better picture here, but the rush to keep this film under two hours turns it into a half-hearted thriller, more interesting for the moving pieces than what any of them are actually doing in a film that’s either a Wire episode too long or an epic detective picture too short.