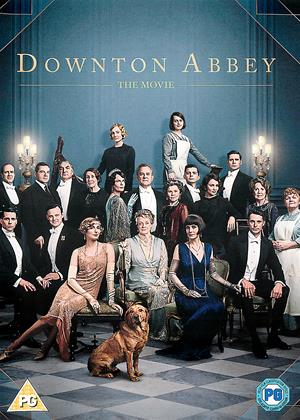 As shallow as a birdbath but quite fun - particularly Maggie Smith's character! It is all a bit forelock tugging, and 'yes sir I know my place', but at least there is a gay sub-plot, which adds a drop of depth. Perhaps this is just the sort of tosh a new Britain deserves?

As a lover of the TV series I was eagerly awaiting the DVD of the film, and having watched it, 20 minutes of the film could have been culled and would have provided a much tighter film whilst at the same time getting the message over!

Maggie Smith gets the funniest lines in this upstairs downstairs comedy of manners. It is as polished as the family silver and as light as one of Mrs Patmore's souffles.

Not a patch on the tv series! - Downton Abbey review by Brummie

I tried my best to like it, but once again, it is very much a ‘snooze’ film. It starts well, but slowly runs out of steam and so did my concentration and ability to stay awake. I really do believe it would have been better for Dowton Abbey to have been remembered for the good TV series and not to have produced this film. Shame. Having said all that, my wife liked this film, so perhaps it’s a film that appeals more to the fairer sex rather than men, where we expect a bit more to keep our attention rather than the slow pace that this one ambles along at. Because my wife like it, I have given the film 3 stars.

We almost bought our own copy of the "movie" to go with the boxed set we already own. We are glad we chose to watch Cinema Paradiso's disc instead; we would not choose to see it a second time

An enjoyable easy watch. Beautifully shot and worth seeing for the gorgeous costumes. Imelda Staunton is excellent and holds her own amongst the catty, prying females.

Watched the series and the film. Felt is was a missed opportunity. The attempted assassination build up could of been better. Too many actors involvement, felt like cameos just to remind you they were in the original series. On the second film, spend more time on the script.

Two stars for eye candy: nice costumes and set. Recommended for a wet Sunday afternoon when you don't want to think...at all. Weak plot. Even the old lady's tongue lost her venom. It's like you run out of tea bags and you re-use the last tea bag because you are that desperate for a cuppa, and hope you won't be able to tell the difference between the original full-flavored cuppa and the second-hand cuppa: the film is the latter.

Could do better - Downton Abbey review by LB

This film really gives me a problem. The principal story is of a royal visit, which is pretty dull and I was expecting some sub plots to add some drama or entertainment. What a disappointment. A mismash of inconsequential drivel and unbelievable storylines supported the main story and not one of them was of any help in rescuing a disaster.

The dialogue was weak; the acting wooden and the characters dislikeable.

Photography and costumes helped to raise it to a 2 star.

More an extended television programme than a feature film. The plot was daft. But it was worth watching for the gorgeous costumes and settings.

Being a big fan of Downton the TV series I was very much looking forward to the film, though a bit sceptical about the transition from small screen to big screen (many successful TV series have not made the transition to the big screen very well). Filmed beautifully of course, with the cast returning to the roles convincingly, I found the main storyline a little weak and pointless___ it didn't hold me gripped as the TV series had done. I hope they don't decided to make another film as I don't think they can possibly equal the series or even this film. For me___ leave Downton where it belongs....

The return to Downton Abbey presents itself more as a scattershot homecoming than a touching finale. Much akin to the Absolutely Fabulous movie, this reunion special of sort brings all the familiar faces back of upper-class wealth, the abbey staff, and royalty for a 1927 era romp. We get all the familiar melodramatic beats of swirling affairs as well as some tension of the times. But with a film bursting with dozens of cast members and a script that includes B, C, D and E plots, the result is a mixed bag of pleasing costume drama and fizzling period piece commentary.

The film begins with what I like to call Period Piece Porn. When Downton Abbey receives a letter about the King and Queen coming for a visit, we don’t see the letter arriving at the abbey. We see the letter being written in fine ink. That letter is then handed off to a royal footman. That letter is then placed on an old-fashioned train. That train takes it to a 1920s post office. And so on. Such is the alluring camera work of Downton Abbey, never missing an opportunity to zoom in on something decadent. So when butlers bring out food for dinner, you better believe we’re going to get an eye-full of that platter.

Anyway, with the King and Queen coming, there’s a lot going on within the Scottish town. A political player arrives who may or may not be involved with an assassination attempt on the King. Intriguing but don’t get too attached. This is just one of many compelling arcs that start with unique ideas and are then quickly resolved before they get good. An assassin reveals himself and questions the political problems of the town just before he is hauled away and never to be heard from again. One member of the abbey ventures to a secret gay club and avoids being arrested in a raid because of his credentials, only briefly harping on how tough it is to be secretly homosexual in such a time. Perhaps the most troubling is the plot of a thieving seamstress. She is caught and blackmailed into finishing a dress overnight, her plight of questioning the class structure shut down far too early.

Part of me wants to see these plots play out but another part of me understands why they’re reserved to being mini-arcs. Clearly the focus is more on the drama within Downton Abbey and it’s clearly the bigger strength of the picture. The most vivid plotline is that of the abbey staff being shoved aside by the royal staff. Irritated they’ll never be able to serve the King and Queen, which may be the highest honor of their entire lives, they stage a mischievous scheme to send the royal staff out on errands and locked in their rooms. It’s especially fun to watch these scenes play out with the wonderful Mr. Carson (Jim Carter) returning once more with charm and sterness, reluctant to go ahead with such schemes.

The whole cast puts their best foot forward in the most gorgeous of outfits but there’s clearly one major star of this picture and she happens to be the oldest. You just can’t get around this film without talking about Maggie Smith as the abbey’s Dowager Countess. Every scene she occupies she eats everyone alive with her words that cut deep and always have the best wit. It’s especially fun to watch her butt heads with Imelda Staunton as Lady Bagshaw as they bicker of heirs. There was so much going on in this picture but it becomes pretty clear the main event was Smith vs. Staunton (or at least that’s what I wanted out of the picture).

The film ends with the possibility of more Downton Abbey but I’m reluctant for a return visit given such a distance it keeps from juicier plots that are treated more as fluff than intrigue. I’m just saying there was ample opportunity here for the abbey to go up in flames when the boiler breaks down twice and is then forgotten about. Imagine how dramatic that ending would be, where the family watches the abbey burn to the ground, only for Smith to mention “The real Downton Abbey will always be in our hearts.”