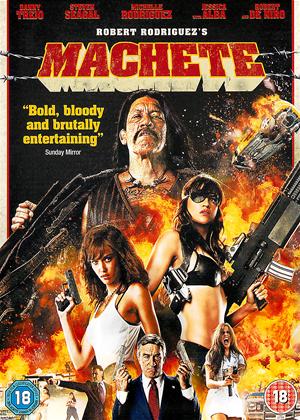 The movie ‘Machete’ was originally a faux trailer shown during Robert Rodriguez’ ‘Grindhouse’ and remade into a full-length feature with ubiquitous and frequent collaborator, Danny Trejo (‘Con Air’, ‘Desperado’, ‘Spy Kids’ movies) as its title character. His weapon of choice is –what else—a machete, and he slices and dices whoever crosses his path. Machete used to be an honest Mexican federale but when a botched Texas drug bust involving Torrez (Steven Seagal) forces him into hiding as an undocumented laborer, he finds himself working for the wrong team.

Soon enough, Machete is hired by a scheming businessman (Jeff Fahey) to kill Senator John McLaughlin (Robert De Niro), a politician waging a war on illegal immigrants. From there, Machete’s life becomes an action-packed Mexploitation B-movie where bullets fly from all sides, heads are hacked only to roll, and everyone kills or gets killed.

Director Robert Rodriguez works with Ethan Maniquis on ‘Machete’, and they are unapologetic of its graphic nature from first frame to the last. The casting of character actor Danny Trejo is quite inspired but even with the grit he brings to ‘Machete’, it’s hard to swallow that he could be a formidable male lead. Case in point: when Trejo romances and kisses Jessica Alba, sexy Immigration Officer. You would think that De Niro seems to be out of place in this craziness, but he relishes in the campy-ness and is also on-point as an all-too conservative hell-bent to eradicate illegal immigrants.

The injection of a political theme is a novelty to a Robert Rodriguez project. His well-known features are produced as homage to 70’s exploitation action movies with a dose of heroic melodrama. But ‘Machete’ is different; it’s also a social commentary on the current US-Mexico border relations. But when combined with the B-movie quality of ‘Machete’, it becomes too heavy-handed and unentertaining. Such a loss for what seems to be an awesome faux trailer.