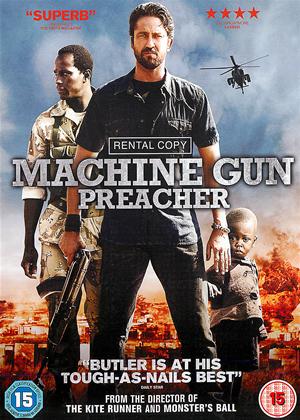 Main character is difficult to like as a person.

The film is not very enjoyable.

Has resmblances to Blood Diamond in general topic, without any of the charisma or the intensity or the beauty.

Do you remember when Gerard Butler had charisma overflowing!

Surely I’m not the only one who thinks this sounds like a missing Grindhouse movie? Turns out, I couldn’t be more wrong; Machine Gun Preacher is based on the true story of ex-con, biker and drug dealer Sam Childers who leaves prison and – after causing trouble for a while – finds God and totally reforms. Eventually Childers finds himself in Southern Sudan where he’s dead set on building an orphanage for children affected by war and forced to become soldiers.

Not quite Grindhouse material, but very difficult subject matter nonetheless and Quantum of Solace director Marc Forster gives it a very good go. He tackles the very messy business of African civil war with a fair amount of grace and delicacy, yet the intricacies of the conflict become a little bit lost in the rest of the story, degrading potentially complex characters into rather basic stereotypical ‘good guys’ and ‘bad guys’.

Unfortunately this pretty much covers the film in general, rather than reaching its full potential it falls slightly short and gets stuck in the swamp of the American drama, that although interesting and even moving in places, does quite have the depth and substance it needs to truly do justice to such an emphatic character and unusual story.

Still perfectly enjoyable and rather interesting it’s not really until the end of the movie that you feel a little disappointed by Machine Gun Preacher.