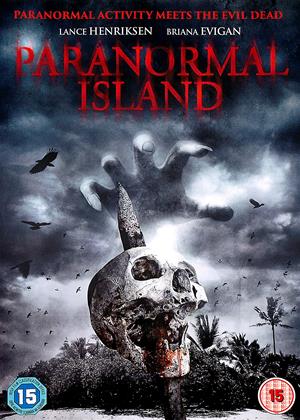 Synopsis:
When three college kids take a summer job bartending at a bar in the middle of a lake, they think it's the job of a lifetime. The bar has been around for over a hundred years, but since the caretaker killed himself many years before the locals believe it is haunted. As darkness falls, and the kids realize they have missed the last boat off the island, they find it's a very different place at night. As they struggle to find a way off the island, the ghost of the dead caretaker is determined to stop them - any way he can!
Actors:
Brian Christensen, Ben Elliott, Briana Evigan, Joe Farina, Lance Henriksen, Eddie J. Fernandez Jr., Sarah Karges, Ashley Lobo, Ben Marten, Steve Rally, Tony Valle, Quincy Villanueva, Randy Wayne, Emmanuel Isaac, Leslie Shraifer
Directors:
Marty Murray III
Producers:
Marty Murray III, Matt Corrado
Voiced By:
Patrick Giraudi
Writers:
Marty Murray III
Studio:
High Fliers Video Distribution
Genres:
Horror

Get a group of males together round a table, give them a pack of cards, and they think they’re Al Capone. In a flashback to 1927 and a lengthy gambling session, the owner of the island on which their den is based, gambles the entire property away and then, pretty unhappy with the situation, shoots himself. Subsequent shadowy noises suggest his spirit remains, however.

Back up to date and much of the interest the story has thus far garnered evaporates sharply with the seemingly inevitable introduction of the standard ‘group of friends’ – and yet these ‘standard’ people have no names; instead they are all ‘dude, bro, man or chicks (plural)’ – or occasionally ‘a**hole’ (one of them is called Mike, played by someone called Randy Wayne unsurprisingly; as the sensible one, he may be slightly less moronic than the others). Not one of them isn’t punch-able. Blemish free, horny, rock kids with no personality but the ability to remind you at every turn, that if they really existed, you’d cross the road to avoid them. You just know there’ll come a time when one of them ‘has to pee’ – and sure enough, that box is ticked too. Lance Henrikson, who is a universe better than this party-fuelled shallow mid-island sweaty nonsense, makes a few appearances. But we don’t see much of him – there is so much more happening, man: the kids are getting drunk and stoned.

What on Earth makes directors/producers (Marty Murray) feel the necessity to clog up their projects with a host of personality-free, manicured non-descripts and drag their work down to the same level as every other such film? The quest to attract the opposite sex knows no bounds here. Powder-puff catwalk girls look coy as hunky males eye up their ‘candy asses’ (everybody probably works out when not copping off). Guys brag about chicks checking them out and pout sulkily when other chicks dismiss the idea due to jealousy. This pristine bubble of a world is crying out to be punctured.

Back in 1972, low-budget exploitation guru Pete Walker produced ‘The Flesh and Blood Show’ for about a fraction of the time and budget it took to cobble this shallow nonsense together. It wasn’t perfect, but made much better use of an isolated seaside theatre for some good creepy moments.

Although some effort is clearly made towards the end to inject some excitement into the proceedings (there is an effective moment when an army of ghosts watch the departing survivors from the water, but even the ghosts are good looking!), this is mainly dross – a routinely constructed tension-free horror with a cast of posturing cretins, scarce chills, and is ultimately a slick waste of time that leaves you gagging for it to end long before events stutter to a dribbling climax and soft-rock at last brings down the curtain.