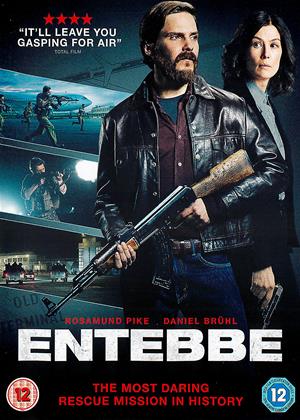 Well, I have to say that I thought this was a pretty poor anaemic effort. The hijackers lacked menace and throughout there was a lack of tension, panic and danger. No one's strong personality shone through. And perhaps I'm missing something but I also thought that the ballet scene inserts were luvvie nonsense and totally inappropriate. Nevertheless, it's a story worth telling (again!)

I don't know whose idea it was to try and link modern dance routines and rehearsals - a tenuous link via the girlfriend of one of the Israeli soldiers - to a raid by Israel of terrorists hijacking a plane and taking it to Uganda when ruled by mad monster Idi Amin, but may I suggest they go and stay in a Ugandan prison for a while? That'll make it real...

Anyway, as a film maybe not as good as the 1976 RAID ON ENTEBBE or THE LAST KING OF SCOTLAND or a drama-documentary I saw about this raid.

BUT this is always a story worth telling - as Israel fights the Islamist terrorists who want to destroy it and all Jews.

The review here that claims Israel 'stole' Palestinian land is nonsense! The land did NOT belong to them at all - and Palestine was only a country under the British. 700,000 Jews used to live in all the surrounding Muslim-ruled states (Iran, Iraq, Syria etc) - they had to leave and had all their property stolen by Arabs who want to kill them. GOOD FOR ISRAEL! It will NEVER be destroyed by Islamofascist Nazi terrorists like Hammas, and if they try then they'll end up like the saddo terrorists here.

It's always good to cheer on Israel, the ONLY democracy in the Middle East with human rights unlike ANY Muslim country in the entire world. I think Palestinian huggers need to so their research and read some history actually - they're as bad as the hard left German terrorists here. AND the Palestinians here hate Jews, end of, like so many leftists in the West too.

Anyway, I liked some psychological drama here with the silly naïve German lefties realising their lives and actions and stupid and pointless.

Interesting information on screen too, and a link to Netanyahu I didn't know.

This would have been 4 stars but all the modern dance references, rehearsals and scenes make me wince - I HATE modern dance with a passion and it's about as welcome in this movie as a Palestinian terrorist at a Bah Mitzva.

Surprisingly well balanced and a well made film! - Entebbe review by CS

Entebbe, the story of when after having their land stolen by the Israelis, the Palestinians fight back! I thought this was going to be typical Israeli propaganda nonsense, but to my surprise it was actually very balanced in its political viewpoint, showing why this happened and the reasons behind the politics which created such an event in the first place. The German members of the Badher Meinhoff Gang who initiated the hijack were really just used by the Palestinians as pawns in a game and it just goes to show how pathetic and superfluous such terrorist actions can be in the bigger game of Politik! Throughout there is a side story of the relationship between one of the Israeli soldiers and his girlfriend who is a dancer and we keep getting shown scenes of her dancing with her group who are singing in Modern Hebrew. This constant cutting from the real action, to her dancing is very off-putting, inappropriate and ruins the drama, especially towards the end of the film where the rescue takes place! I am presuming that because the film seems to sympathise with or at least tell the Palestinian side of the story in an open and honest manner, the film makers felt that for balance they needed to show an Israeli viewpoint too through the dance, but Israelis, Hebrews and Jews are in fact not the same thing at all! If this relationship and the dancing were cut from the film entirely, then the film would have been very good indeed and a lot more balanced, but the dancing just ruins it, especially towards the end! How accurate the film is to real events no one will know, because the Palestinians and a large number of Africans too were killed by the Israelis, so no-one was actually left to tell their side of the story, which again makes it even more surprising how well balanced the political viewpoint shown in this film actually was! Perhaps for more balance now, they will make a film about all the extremist acts Israeli Terrorists have committed against innocent people too!

I would agree with the most recent reviewers - watch the original. This lacked tension and I could not see the point of including the dancers.

It’s 1976 and a group of Palestinian and German terrorists hijack a plane carrying Israelis and land it in Uganda. Even if you know the ending of this thriller based on true events, it’s still tense stuff. We see events mostly from the point of view of the hijackers, which makes it somewhat biased. There are scenes set in Israel, added at a later stage of script development to try and redress the balance, but they mostly concern politicking and rescue planning. The hijackers are the film’s emotional heart and the thrust of the film is anti-capitalist and anti-Zionist.

It’s well acted and directed but, as well as the bias, there are some ruinous flaws. Several flashbacks to the hijack’s planning slow the pace and contribute no information that couldn’t have been slotted into the present. But worst of all, the rescue attack by Israeli soldiers, to which the plot has been building, is intercut with scenes of an Israeli dance troupe performing on stage. It’s supposed to be a metaphor but it turns the otherwise tense attack into a laughing matter.

Certainly different in tone and action levels from the original film, with an emphasis on the politics behind the event rather than the event itself.It certainly highlighted the naivety and hypocrisy of the German terrorists, supposedly acting in solidarity with the Palestinians. While there has been a lot of criticism of the dancing sequences, personally the biggest flaw for me was the anti climax of the Israeli rescue raid, which was very short and largely glossed over. Overall well made and acted.

balanced but whats with the ending? - Entebbe review by JD

While pretty dull overall, i liked the balance in the story. From the naive german pair, the extreme but badly hurt Palestinian terrorists to the blood thirsty Israelis defending themselves with a leader who desperately wanted to resolve the whole conflict once and for all in a peaceful manor.

The film is likely most remembered for its ending however. Regardless of your view on Israel the entebbe mission is a classic, and it was pretty much skipped and replaced with a peculiar dance scene (really!) To me it looked like the director was either scared of failing in reproducing the action or felt dancing instead of shooting might win them a gong at the Caan festival......

Ruined By The Portrayal Of The Raid - Entebbe review by KM

This film was a huge let down because of the way it portrayed the actual raid, the most important part of the film was a disjointed mess because of the totally unnecessary interaction with a dance sequence which totally destroyed the tension. The original film was far better as it concentrated on showing the raid properly.

Entebbe - a film of some promise that left me wanting... - Entebbe review by Rod

Yes, a grimly [and indeed grimy] suspenseful build-up that gave a compelling atmosphere of the initial events and the fears of the hostages... the Israeli cabinet meetings were realistic and no doubt just as smoke-filled as in the film. Eddie Marsan played Shimon Peres in a suitably dry, philosophical way that made me smile. But the film seemed to run out of steam in the crucial stages of the flight to Uganda and the fleeting skirmishes on the ground. This all left me rather underwhelmed. And while there was some good characterisation of the German terrorists, there was a lack of an equivalent story for any of the hostages (maybe some, but not enough on balance). And don't ask me why the modern dance sequences were included !! Maybe the director thought this was worthy art-house stuff, but with interruption of the plot, it was downright irritating!!

I looked forward to this, being interested in Uganda and the historical event that was being addressed. However, there was little history or political analysis apart from the throwaway stuff. I will go elsewhere for entertainment and/or to learn about politics and history relating to that relatively famous historical event.

Dance of the Mad - Entebbe review by RB

This was an outstanding film until the ridiculous and inappropriate dance sequence that ran over the raid scene. A good movies spoiled.