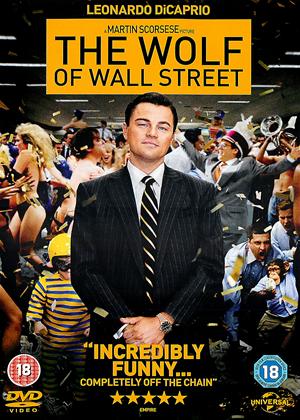 Rent other films like The Wolf of Wall Street

Reviews (16) of The Wolf of Wall Street

Step aside DeNiro! - The Wolf of Wall Street review by Milstead On Movies

Leonardo DiCaprio & Martin Scorsese have a brilliant collaboration going on which is beginning to rival the screen legend's partnership with the great director.

This is the fifth film which DiCaprio has worked with Scorsese, following Gangs Of New York, The Aviator, The Departed & Shutter Island.

The Wolf Of Wall Street amounts pretty much to Goodfellas of the financial world. Based on the true story of Jordan Bellfort, a drug-addicted, sex-addicted, money-addicted stockbroker who lives life to full excess and pays the penalty when the FBI investigate his wrongdoing and underhand tactics.

This black comedy is as black as they come with DiCaprio, Jonah Hill and co all playing unsympathetic characters who get rich making others poor, indulging in the lifestyles of rich and famous and taking an insane amount of drugs.

In another year, DiCaprio might have won the Best Actor Oscar for this performance (he lost out to Matthew McConaughey for Dallas Buyers Club).

At nearly 3 hours, this film is a long slog and the first hour drags a little, but it's full steam ahead after that and a brilliant comedy of yuppie greed during the 1980's and 90's.

High octane! - The Wolf of Wall Street review by TH

This film presses all the buttons in terms of sex, drugs and rock and roll (and lots of money!) but its psychopathic (almost exhausting to watch!) pace leaves you in no doubt that this is not a world in which you'd want to live in! Cleverly crafted modern fable.

This film is just brilliant. It should have won Oscars, for sure. It's probably one of my favourite Scorcese movies now too.

No doubt some 'politically correct' people will find it offensive, as I heard some po-faced humourless feminist whinge-Wendy describe it as on the radio last year.

My only criticisms: 1) it's too long, like most Hollywood movies these days; 2) The alcoholic druggies look far too healthy - in real life, it ain't like that!

But these are minor quibbles.

In general, this movie is a hoot - and with a serious message too. I was surprised it was this good - I watched it the same evening as American Hustle, which is yawn-inducing in comparison.

The Wolf of Wall Street should perhaps have won the Oscar for Best Movie, (instead of the tedious up-itself Gravity), and won Leonardo one too for this bravura performance.

One of the best films I have seen in the last decade.

Martin Scorsese is here in his familiar comfort zone, which he has revisited with varying success, ever since the coup de cinema that was the opening scene of Mean Streets.

This time it’s a group of upstart boiler room scammers, flogging pump and dump stock to the poor, a group which burgeons and swells to some hundred salespeople, red in tooth and phone manner, and awash with illegal substances.

They make shed loads of money of course, and it all goes into the toilet of course, their greed and excess ensuring that there could be no other outcome. There’s lots and lots and lots of hysterical sex, and slightly less drug use, and what little rock and roll appears is provided by Robbie Robertson doing the sound track. The Quaaludes overdose scene is the funniest in the film, with DiCaprio proving that he can do physical comedy, and indeed, all the playing is exemplary.

The film is based on a true story, so it had all the themes of the little guy bucking the system that Scorsese has returned to so often. But the thing is, the real wolves of Wall Street, and Main Street, and the high streets and village streets across the world are not cocky little bastards like Jordan Belfort. They’re the big guys and corporations who still rule the universe, however many financial crashes there may be, and they've not been reduced to touring New Zealand with a tacky sales success course. Did Marty miss a trick in not including them?

I gave up - The Wolf of Wall Street review by MS

Both salacious and tedious. The acting is good, but I didn't believe any of it. I gave up after an hour. And that was an hour too much.

A tale of greed, sex and illegal drugs in 1980s New York - The Wolf of Wall Street review by PJ

In 1987, Jordan Belfort (L Di Caprio) starts his career as a stockbroker on Wall Street. Having lost his job following Black Monday, he begins to work for a boiler-room brokerage firm on Long Island specialising in ‘penny stocks’. He is soon running his own, booming business, which makes him very rich; he has also become addicted to sex, prostitutes, and illegal drugs while indulging in non-stop partying.

Although a bit too long (over 2 hrs 45 mins), the film is very good and entertaining, with many hilariously funny scenes. It is a convincing depiction of the drug-fuelled world of stockbroking, at any rate at the time. L Di Caprio puts in a remarkably good performance as the sex-crazed spiv who is addicted to drugs, success and money.

The only thing that is missing from the movie is any sort of reflection as to the damage done to investors by such unscrupulous brokerage firms -- more particularly those dealing in so-called penny stocks, targeted at low-income investors. Then again, it is not that kind of film.

Top Dog - The Wolf of Wall Street review by PT

The acting is top drawer by Dicaprio and Hill. The scene when they drop lemons was astounding. Also a superb cameo by mcconaughey.

Great story at neck break speed. I didn't want it to end, and know I will watch it all again several times. And guys, let's be honest here, there's so many beautiful women, can't be bad. Fantastic.

Judging by the Title one might assume the movie will be a copy of Wall Street: Money Never Sleeps or maybe Catch Me if you Can.

The movie is sufficiently different and will keep you entertained for the full Three hours. What can I say, Its madness which borders on Hilariousness. Great Movie.

Don't bother - The Wolf of Wall Street review by AW

Oh dear. Surely Leonardo, as a talented actor, is not finding his roles are drying up?

How on earth this was even nominated, let alone won, two oscars is a shock.

One star for Leonardo's acting. A thoroughly boring three hours of foul language, gratuitous sex and drug taking. The Narsistic characters had no redeeming features, just hellbent on satisfying their own lust for money and base pleasures. Awful.

A word rarely used in the same sentence as the name Martin Scorsese is comedy, from dark family dramas like Alice Doesn’t Live Here Anymore to his much better known crime dramas like Casino and The Departed, Scorsese usually avoids comedy like the plague. That’s what makes it so surprising that he decided to direct The Wolf of Wall Street, a completely unexpected yet awe inspiringly funny film thats hard to imagine being as good under anyone else's direction.

The film follows the titular Wolf of Wall Street, Jordan Belfort (Leonardo Dicaprio), a man whose sole drive is to make more money than the next man. His rise to power on Wall Street and the subsequent FBI investigation are married by Jordan’s extreme love of every single type of narcotic, his (extreme?) affection for women and his willingness to do anything to hold onto the riches he has amassed.

It’s easy to watch The Wolf of Wall Street and see a man corrupted by an industry that corrupts everyone and the film intentionally tries to foster this image but mostly you see a man coming into his true self, an identity he was born to have even if he hadn’t realised it yet. Jordan is a wicked man, a man willing to sell his soul for another dollar even before his slow decline into a world of shame and guilt. Denying his true self however may have left him happier.

Dicaprio is fantastic as usual as Jordan, bringing out every excentiricty of the man but bringing his own charm to the part as he uses those around him to further his enterprises. However, Dicaprio really shines in the films comedy moments, his complete devotion to the material makes for some of the funniest physical comedy with a crazy bender about halfway through the film leaving me in a fit of tears and laughter.

Populated with many other great actors from Jonah Hill to Kyle Chandler, the film is only really let down by Margot Robbie as Jordan’s trophy wife Naomi, a paper thin seductress. The only off note in the entire picture, Robbie doesn’t do the role justice but in the long run it doesn’t harm what turns out to be one of the funniest films you will see in 2014, a mixture of big belly laughs and plenty of drugs. Watching Jordan is a hell of a lot of fun despite his despicable nature.